“Sangry” is a made up word to describe someone who is sad and angry at the same time. It often strikes me as an odd combination because anger is a motivating emotion, designed to get people to act. Sadness usually leads to isolation, quietness, and lack of energy. They seem so antithetical we may miss one emotion due to the other. Working with foster children, I am often reminded that, in children, depression usually manifests as anger. As I work with adults, I wonder how often anger may manifest as sadness.
Kierkegaard, in his journals, writes about how incongruence can often be overlooked by others: “I have just now come from a party where I was its life and soul; witticisms streamed from my lips, everyone laughed and admired me, but I went away — yes, the dash should be as long as the radius of the earth’s orbit ——————————— and wanted to shoot myself” (Journal entry, 1836). There is a great deal of talk in therapy circles about “primary” vs “secondary” emotions. While I do believe emotions may be ordinal and even causal (“First I felt ___, then I felt ___”), but the labels of primary and secondary have often been interpreted to mean that one emotion is more “real” than another emotion. This may be a disservice to emotions. This can be traced back to Freud’s quote that “anger turned inward is depression”. This view of depression, while not comprehensive, may not be entirely wrong. The problem begins to arise when therapists try to treat one emotion over another in order to relieve both.
A prime example of this is present in Emotionally Focused Therapy (EFT). I was lucky enough to speak briefly with Susan Johnson, the progenitor of the theory, at an EFT conference in San Diego. Within the EFT forums there are lively debates about the “secondary” or “primary” nature of anger. Susan Johnson stated she believed it was a primary emotion and cited a case she worked on where a husband had been unfaithful in the marriage and several sessions were spent allowing her to appropriately vent her anger. When I asked her what experience they dealt with next, she said, “The wife’s pain at being hurt and abandoned by her husband”.
In wrestling with this question about which emotions come first, second, third, or fiftieth, I think I’ve come to one conclusion: it doesn’t matter. Rollo May describes the solution this way: “…if I ask, “what is shame?” nine out of ten answers will deal with why shame develops, and say nothing whatever about what shame is. We tend to assume that if we have a causal explanation or if we describe how things develop, then we have described the thing itself. This is an error. The phenomenologists hold that we must cut through the tendency in the West to believe we understand things if we only know their causes, and to find out and describe instead what the thing is as a phenomenon — the experience, as it is given to us, in its “givenness.” As a therapist, I find that both I and my students get into interminable binds trying to figure out the cause-and-effect pattern of the patient’s shame, for example. But if we ask, “what is he trying to say by his blushing? What is the experience in its immediate givenness?” we find ourselves not only freed from the vicious circle [of trying to know] but often able to offer a sudden illumination of what the shame is all about. The phenomenological approach not only adds richness and a liveness to the data, but also makes patterns of behavior accessible which were previously a foreign language” (Psychology and the Human Dilemma, 1996, pp. 88-89).
May goes on to clarify that this does not mean causes don’t exist or are not important, only that they do not completely define the outcome. That, perhaps in diagnosing or treatment planning, categorizing emotions as primary or secondary may be beneficial. However, as we are experiencing a person, perhaps it would be best to experience their anger, their joy, their sadness, as it is. If I were to become better at this, how much more like would I be to see the true source: the person experiencing the emotions? Ultimately, that is the issue. A person may be sad, angry, or sad and angry, but they are still a person and that fact must not be missed. Staying present and with the current emotion is mandatory if we are to remain present with the person feeling those emotions. We may reflect, interpret, and ask, but, in the moment, it does little good to understand a cause at the loss of the source. 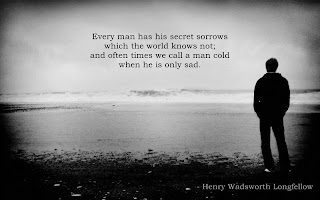