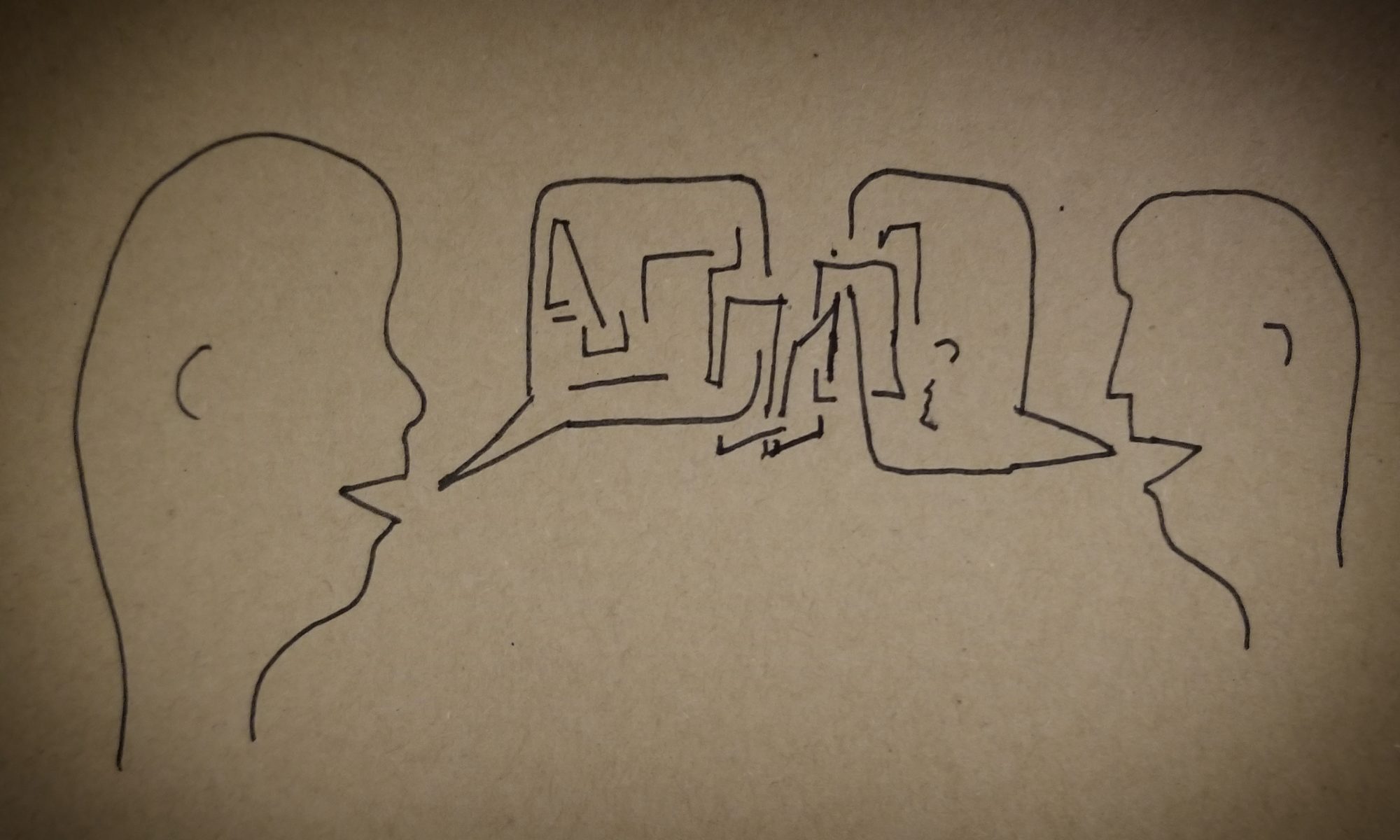 Along with the loss of the sense of self has gone a loss of our language for communicating deeply personal meanings to each other. This is one important side of the loneliness now experienced by people in the Western world.

Rollo May, Man’s Search for Himself.

One of the most frequent requests in couples therapy is help with communication. Over the years, I’ve noticed that most conversations in relationships fall into three general categories: Debates, Dialogues, or Dialectics. I don’t think either of these types are inherently bad or good. However, some are more beneficial than others in different situations, so it’s important to know what type of communication you’re having! Without that, who knows if your conversation is moving you in the direction you want?

When someone tells me they want to be heard, I usually ask, “How will you know when the other person really hears you?” More often than not, the answer I get back is, “They’ll agree with me!”
Look, we all have a little bit of narcissism in us. It’s good to have some
“Most people have no imagination. If they could imagine the sufferings of others, they would not make them suffer so.” ― Anna Funder, All That I Am
Personal Punching Bag
The majority of clients and families I have worked with have experienced a trauma of one form or another. Existentially, the experience of trauma is nearly universal. Almost everyone has at least one threatening experience. These traumas may be physical, psychological, or emotional. While the DSM 5 leaves little room for emotional trauma to be considered when diagnosing posttraumatic stress disorder (PTSD). I would argue, however, that if a PTSD diagnosis is based on symptomalogy rather than etiology, there is ample evidence for emotional PTSD (ePTSD*).
Families can systemically experience emotional traumas. These traumas, whether inflicted internally (by family members) or externally (outside circumstances or individuals), are usually highly interpersonal (rather than impersonal) and compound (occurring frequently in various settings). Here is a great article on the variations in the etiology of PTSD. Again, this information can be very beneficial in predicting and preventing trauma, but it is of little use to the existential therapist who seeks to facilitate authentic healing from traumatic experiences. To minimize the impact of emotional trauma, in favor of more visible trauma like physical and sociological, can inhibit the ability of a therapist to successfully identify, and treat, systemic trauma.
The symptoms of PTSD can also be found in ePTSD. Just as physical trauma usually reflected in physical symptoms, emotional trauma will usually result in emotional reactions. I will use traditional PTSD symptoms and suggest their emotional parallels with potential existential responses. To explore the symptomatic parallels, let’s use this hypothetical situation:
A newly married could comes to your office complaining of a lack of emotional intimacy. Spouse X states their trouble began when X had briefly mentioned a family friend had an affair or was involved in an open/poly-amorous relationship. Spouse Y claims to have a history of being cheated on, including coming from a home where one parent was unfaithful to the other which resulted in a turbulent divorce.
At intake, the couple described a sense of all the air being sucked out of the room. X’s offhanded comment had resulted in an emotionally cold and distant response from Y. Y looked directly at X and, with absolute conviction, stated, “I knew you’d do this. I just didn’t think it’d be so soon.” X was flabbergasted! Clarification was requested, but Y walked out of the house without stating an intended destination or time of return. X, alone in the house, chose to watch some TV, clean a bit, but more than anything, functioned in a fog. It wasn’t until late that evening when Y returned home; still cold and aloof. X gave Y some space, hoping this would offer some appeasement. After a long and silent dinner, as bedtime approached, there seemed to be no relief in the tension. As the couple drifted off into the fitful sleep only emotional exhaustion can foster, Y began to shout and cry while sleeping. Y flailed out with their arms, then drifted back into silent sleep. Naturally, this had upset X, who also slept in small spurts, punctuated by the sounds and movements of Y.
The next morning, though tired, the gravity of the situation had seemed to reduce. Y was in a better mood, had smiled at and even hugged X, and had left for work as normal. X breathed a sigh of relief and returned to a regular routine. Things seemed to be getting better, but over the next few weeks X noticed Y was working longer hours, often not returning home until late at night, well after their usual bedtime. Physical intimacy decreased to zero and, when questioned by X, Y become very hostile and angry. X attempted to clarify the concern regarding their intimacy. Y responded defensively citing exhaustion from an increased work-load, accused X of not appreciating how hard Y was working, and would often disappear for several hours after these discussions.
During the interview, Y regularly looked surprised as X recounted many of their interactions. Y claimed to remember fewer than half of these discussions and sat through the majority of the session avoiding eye contact, with closed body posture, and minimal participation. X was the primary agonist for pursuing therapy and was the most verbal historian at intake.

Now let’s explore how the potential ePTSD reactions could be expressed (1-4) and a few interventions (responses) the existential therapist may use to encourage meaningful healing. Many of these symptoms may overlap at various points. This is common in working with families and individuals dealing with trauma.

*ePTSD is not a diagnosis recognized in the DSM 5. It is my term for the an aspect of trauma many therapists already recognize and treat, without having specific verbiage.

“I remember driving to therapy and thinking, ‘Well, this is it. I’m all out of stories’. I didn’t know what I was going to say. And that was when therapy really began.”

-Dr. Ron Wright on attending therapy while in his graduate program
Many parents and couples “warn” me when they believe a member of their family participating in therapy struggles to tell the truth or are manipulative. I appreciate the heads up and it almost always reminds me of an experience from grad school.
A client told me a horrendous story regarding the loss of his wife and children on halloween night as they came to visit him. He cited this tragic loss as the reason for slipping into depression, alcoholism, and ultimately losing his job and becoming homeless. I worked with the client for several weeks before court documents from his very un-dead-yet-not-a-zombie-wife appear requesting garnishment of his wages. His wife did not die, nor did he lose his children. They simply left him when his alcoholism began overrunning their life.
With this realization fresh in mind, I burst into my supervisors office ranting about the gall of a client to waste my time, his time, the worlds time, on complete lies. My supervisor, calm and patient as always, asked one question, “so what?” It made no sense to me at the time. Not until several years later did it finally sink in: there was truth in the lie. The factuality of the content was null and void. The meaning beneath the content contained truth. The story he told was false. The abandonment he felt was real. I was so hung up on factuality I missed the truth.
For those, like myself, who can sometimes get so hung up on truth we miss it, think about this: If a bear appeared behind you right now, how would you feel? Happy? Hungry? Excited? Probably none of these. Assuming you are coherent and aware of said bear, you would be scared. You probably, hopefully, don’t have a bear behind you right now. This does not change the truth that you would have been scared. Fear would have been your primary emotion.
Does it matter if the bear was there or not? Does it matter if the man’s family died or not? However, the emotions underlying those experiences are universal and translate to multiple contexts. The situations may vary. The underlying emotions will remain. This “truth” allows for common ground and removes the necessity for “rightness”.